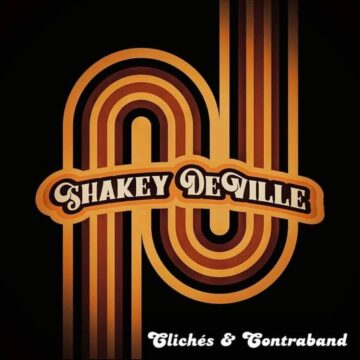 Review:
Shakey De VilleThe self-titled debut EP from is an album that I had a hard time reviewing. Sometimes reviews write themselves but definitely not for this one. I usually listen to an album five to 20 times before reviewing it and I had to do it several times to Shakey De Ville and it’s not because I really want to but because I don’t really know what to say about the EP. That being said, the more I listen Shakey De Villethe more I appreciate it.

The EP opener and video single “Shot’s Fired” reminds me of a track that could be found on today gone missing. last ballthe self-titled debut EP. It has a bluesy feel with a cool groove. In the beginning when I was listening Shakey DeVille, I found “Shot’s Fired” and the following song “Alley Cat” too slow but as I listened (and listened) to the EP, I warmed up to the slower speed of these two tracks. I must say that I was surprised that the group put two slower bluesy titles like these at the very beginning of the EP. “Alley Cat” has an easy-to-sing chorus, and you’ll probably be yelling “Get Fucked” at just the right time with the band members when the song gets to that point. “Fly So High” is probably the song that grabbed me the most when I first heard the EP because I feel like there’s more melody on the track due to its faster pace. “Move On Over” reminds me of the beginning last ball again, which is a good thing.

“Place Your Bet” has a real Badlands / voodoo highway feel, which is impressive given that the Shakey De Ville the band members seem to play much more mature material than their presumed young age. Guess these young guys are old souls so they can capture the blues and Badlands feel so good. “Place Your Bet” is definitely one of the highlights of the Shakey Deville EP and unsurprisingly one of the fastest tracks to be found on the record. “Too Fast” is a hotter track for the Shakey Deville members. I find Dan Millersings on this track, it’s as if he were telling a story between friends while the two were having a beer in a run-down joint. the Shakey De Ville The EP ends with the (yet) slower-paced track “Drawdown” which, unfortunately, drags on at over six minutes. It’s the only song I tend to skip off the EP and that says everything you need to know about what I think of the song.

Overall I like Shakey De Villethe first EP even if I think the order of the songs should have been better configured. Starting the EP and ending it with probably the two slowest tracks seems strange to me. Also, having three slower bluesy numbers on an EP with only seven tracks is a bit too much for me. I like faster-paced songs, so having to hear three slow-paced tracks kills the momentum of the album and makes me reluctant to play the EP regularly.

Reviewed by Olivier for Sleaze RoxxApril 2022